Below you will find studies on kombucha cultures of yeast and bacteria and how it produces antimicrobial compounds for
protection from foreign invaders.  Besides acetic acid, which is produced during the fermentation process,
kombucha is thought to have other factors and compounds
that may aid in these protective factors.

Kombucha Fermentation and Its Antimicrobial Activity

Kombucha was prepared in a tea broth (0.5% w/v) supplemented with sucrose (10% w/v) by using a commercially
available starter culture. The pH decreased steadily from 5 to 2.5 during the fermentation while the weight of the “tea fungus” and the OD of the tea broth increased through 4 days of the fermentation and remained fairly constant thereafter. The counts of acetic acid-producing bacteria and yeasts in the broth increased up to 4 days of fermentation and decreased afterward. The antimicrobial activity of Kombucha was investigated against iaa number of pathogenic microorganisms. Staphylococcus aureus, Shigella sonnei, Escherichia coli, Aeromonas hydrophila, Yersinia enterolitica,  Pseudomonas aeruginosa, Enterobacter cloacae, Staphylococcus epidermis, Campylobacter jejuni, Salmonella enteritidis,  Salmonella typhimurium, Bacillus cereus, Helicobacterpylori, and Listeria monocytogenes were found to be sensitive to Kombucha. According to the literature on Kombucha, acetic acid is considered to be responsible for the inhibitory
effect toward a number of microbes tested,
and this is also valid in the present study.

However, in this study, Kombucha proved to exert antimicrobial activities against E. coli, Sh. sonnei, Sal. typhimurium, Sal. enteritidis, and Cm. jejuni, even at neutral pH and
after thermal denaturation.

This finding suggests the presence of antimicrobial compounds other than acetic acid and large proteins in Kombucha. 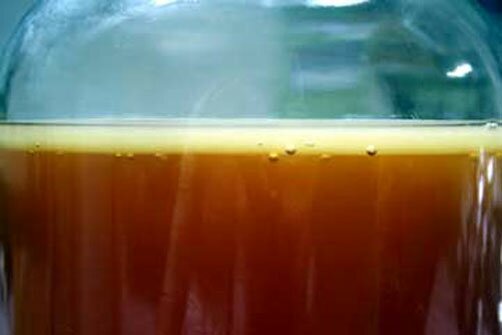 The tea fungus ‘Kombucha’ is a symbiosis of Acetobacter, including Acetobacter xylinum as a characteristic species, and various yeasts. A characteristic yeast
species or genus has not yet been identified. Kombucha is mainly cultivated in sugared black tea to produce a slightly acidulous effervescent beverage that is said to have several curative effects. In addition to sugar, the beverage contains small amounts of alcohol and various acids, including acetic acid, gluconic acid and lactic acid, as well as some antibiotic substances.

To characterize the yeast spectrum with special consideration given to facultatively pathogenic yeasts, two commercially available specimens of tea fungus and 32 from private households in Germany were analysed by micromorphological and biochemical methods. Yeasts of the genera Brettanomyces, Zygosaccharomyces and Saccharomyces were identified in 56%, 29% and 26% respectively. The species Saccharomycodes ludwigii and Candida kefyr were only demonstrated in
isolated cases. Furthermore, the tests revealed pellicle-forming yeasts such as Candida krusei or Issatchenkia orientalis/ occidentalis as well as species of the apiculatus yeasts (Kloeckera, Hanseniaspora). Thus, the genus Brettanomyces may be a typical group of yeasts that are especially adapted to the environment of the tea fungus. However, to investigate further the beneficial effects of tea fungus, a spectrum of the other typical genera must be defined. Only three specimens showed definite contaminations. In one case, no yeasts could be isolated because of massive contamination with Penicillium spp. In the remaining two samples (from one household),
Candida albicans was demonstrated.

The low rate of contamination might be explained by protective mechanisms, such as formation of organic acids and antibiotic substances.
Thus, subjects with a healthy metabolism do not need to be advised against cultivating Kombucha.
However, those suffering from immuno-suppression should preferably consume controlled commercial
Kombucha beverages.