Use for Amasaké, Saké, Light Misos, or Japanese Pickles

Making your own fresh koji rice is not complicated if you have the correct tools and utensils on hand.  Some equipment listed will make the process easy for someone with culturing experience.  Making koji rice may not be the best culture for someone
new to fermentation or culturing..

How to Make Koji Rice…
Let’s Us Get Started…

Step1:  The first step is to rinse and soak the sushi rice for 6 hours or more.  Time this to end at the point you wish to start steaming the rice.  Rinse the 6 cups of rice several times in fresh cold water until the water runs clear.  This will take around 3 to 6 washes. 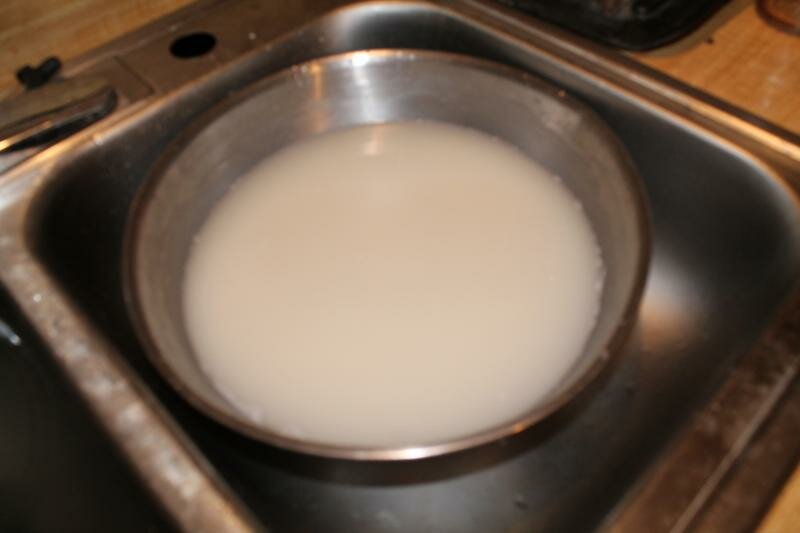 Rinsing is very important to remove the starch from the rice kernels.  If not removed, the finished steamed rice can stick together and makes complete inoculation difficult.
After rinsing, cover the rice with 2” or 50mm of water and soak the rice in the refrigerator for 6 to 8 hours.  We soak ours overnight.
Note:  If allowed to soak more than 10 hours will make the rice soft and may affect the inoculation process.

Step 2:  After soaking, drain the rice in a colander to remove excess water.  Removing the extra water between towels will also work.  This step aids in keeping the cooked rice lump free.  Once ‘dry’ place the rice in the pan setup.  The setup includes the large cooking pot, a bamboo or metal steamer, and the modified bowl that will fit into the bottom of the pot.  Add two inches of water to cover the bottom of the pot, but does not touch the steamer. 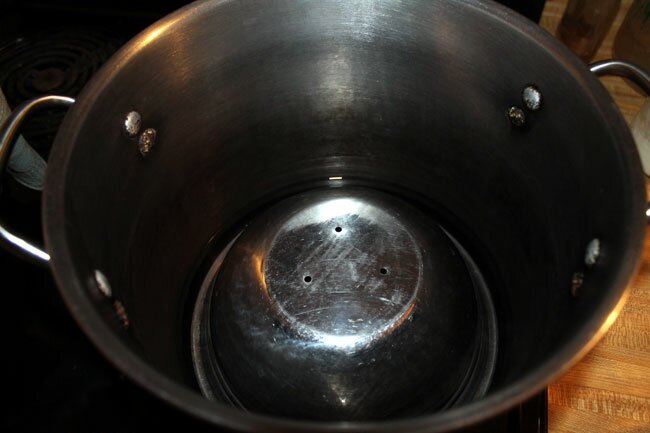 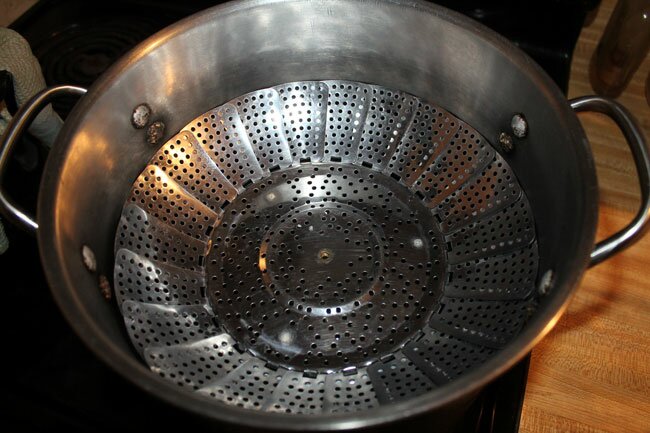 Line the steamer with the cloth and add the soaked rice.  Press the rice out to the sides so the steam will go through the rice and not around it.
We find that making a hole in the center of the rice helps in correct steaming.  Cover the pot and bring to a boil.  When the steam rises through the rice (not just up the sides), time the steaming rice for 50 minutes.  Watch to make sure the water does not boil dry.  Add additional water by pulling rice bundle to one side and pouring the water down the side of the pot.  About halfway through the process you may wish to turn the rice so the bottom will not over steam.
Note: Do not poor the water on the rice.
CAUTION: Steam is very hot, so use utensils to avoid injury and safety. 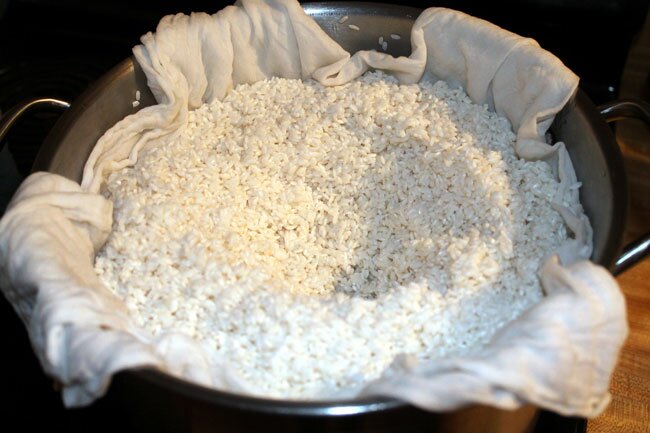 Step 3: As the rice is steaming, prepare the koji spore starter for inoculation.  Start by heating a dry skillet and lightly toast the rice flour to sanitize it.  Not not burn the rice flour.  Cover skillet and place in the refrigerator until cooled to room temperature.  Once cooled, add the koji spores and mix well with clean spoon.  Expel the air from the spore starter bag and reseal.  Spores are very small and adding them to rice flour helps in even distribution of the spores.  At this time, clean your work area, too.  Wash and sanitize the trays for inoculation.

Step 4: After steaming for 50 minutes, the steamed rice will look like a hot rubbery lump.  You may check to see if the rice is ready by taking a small sample and tasting it.  Properly cooked rice will have a rubbery feel and taste, the colour is somewhat clear.  Rice should not be hard (under cooked) or soft like boiled rice (overcooked).

Remove the rice from the steamer and place in the incubation trays.  Use a wooden spoon or rice paddle to brake up any clumps in the rice and create a uniform overall moistness and spread evenly in pan or tray.  Cool to a temperature between 113 F (45 C) to 80 F (30 C).

Once cooled, the freshly steamed rice is ready for inoculation.  Use the previously prepared spore and flour mixture for this purpose.  Sprinkle half the starter-flour mixture over the cooled rice and mix thoroughly.  Again, spread out the cooled rice, add the second half of the starter-flour mixture, and mix well.  Now cover the trays/pans with the cover or use plastic wrap and place tray(s) in the incubator or on the heating mat.  Sometimes an oven with the light on will produce the required heat.  Incubate at a temperature of about 90 F (35 C).
Note: It is important to get the koji mold actively working before unwanted bacteria can take hold.  It is also fine to add extra spore starter, which will speed up the culturing time.

Step 5:  Throughout the day, every 2 to 4 hours, check the internal temperature of the rice koji.  Should hold temperature at 81-96F (27-35C).  This temperature range is optimal for the development of enzymes necessary to make sweet cultured foods like amazaké and make sugars available for saké yeast.  Temperatures higher than this will not ruin the koji for miso making, however, prolonged overheating will kill the koji mold and unwanted bacteria may take over.  Once the temperature is checked, make necessary adjustments to the incubator.

After 24 to 48 hours at 85F (30C):  Wash your hands and open the trays.  There should be a faintly yeasty smell with a sweet fragrance of mushrooms.  The grains should start to show white, fluffy signs of mold growing.  If the koji rice is not fully cultured, mix the koji and allow incubating several more hours.

Note:  As the koji rice ferments, it will produce heat from fermentation so decreasing the incubator temperature will be needed.  To allow better heat distribution, run furrows one inch deep and two inches apart.

Replace the lids and place back into incubator or on heating mats.  Make sure lids are tight to keep in moisture.  If the rice becomes to dry fermentation will decrease or stop altogether.  Adding a damp cloth over the trays can help if more moisture is needed.
The internal temperature should not drop below 77 F(25 C) nor go above 104 F(40 C) for very long.  If the rice is over heating, stir the koji rice mixture, level off and replace furrows.  Cover and place into the incubator and adjust temperature.

Step 6:  Keep checking the temperature about every 4 hours and stir koji rice at this point.  Level off, replace furrows, and cover.  Keep incubating the koji rice mixture, until rice grains are about 70 to 80% encapsulated.  Check this by breaking some of the grains in half.  By now, the rice should have a chalk-like whiteness and a sweet taste.  Once mature, bring trays to room temperature and stir from time to time, until cooled.

Measure out the amount needed for immediate use.  Once cooled, package the koji-kin into airtight containers and place in refrigerator or freezer.  Dry the finished koji rice product for longest-term storage (Dry at a temperature below 85 deg F).

Fresh koji-kin rice will last about a month, dried and keep refrigerated 6 months, and dried and frozen will last up to a year.

See our koji recipe section for ideas on how to use your fresh koji in many traditional Japanese dishes.

Some have asked on how to make koji spores themselves.  If the finished koji-kin rice is left on it’s own, without drying, it will start to produce spores.  Koji spores are dark green in color, as pictured below.

Tray of Koji Close Up

Once the spores are produced, the natural culturing cycle is complete.  The cultured rice is dried at a temperature of under 85 Deg F and then ground to a powder.  The only problem arises from doing this yourself, is that of quality and purity controls.  Because the spores are produced in a home environment vs. a lab the chance of contamination by other molds and/or bacteria is high.  We do not produce any spores at our Culture Bank.  We buy our tane-koji and kin-koji spores direct from Japan!